All Categories
Lloyds Banking Group
Looking after your mental health
37

Looking after your mental health

Before the pandemic, research showed 1 in 6 workers were dealing with a mental health problem at work that stops them performing at their best. Anxiety, depression, and high levels of stress are becoming more prevalent in the workplace. The Covid-19 pandemic has impacted many more of us, with Mind research suggesting that 68% of people with existing mental health conditions seeing things worsen. And 1 in 5 people with no previous history of poor ill mental health have described their mental health as being poor or very poor.

But there are some things we can do - talking about how you're feeling, or checking in with someone you've noticed has changed their behaviour. We wrote a blog post with lots of information that you might find helpful.

We've also got some further guidance on our website, and you'll find a lot more (including some wellbeing webinars with the Bank Workers Charity) in our news and blogs using the search #MentalHealth.

You can find out how Accord can help you further in this article, along with many other external providers who can help if you're having a difficult time, or are worried about someone else.

Through the rest of this article, we've got some information about lesser discussed topics; suicide prevention & support, domestic abuse, and perinatal mental health.

In the UK in 2018, more than 6,800 people died of suicide (and it’s more than 80,000 people worldwide). And we know that suicide is preventable — it’s not inevitable. 3 out of 4 suicides are by men and it’s the biggest cause of death in men aged 15–29. Research conducted in relation to lockdown also shows that although many wanted to talk, nobody checked in with them.

The ALEC technique is a useful way of supporting someone dealing with a mental health crisis or suicide ideation:

You might have heard of the following terms: antenatal or pre-natal meaning 'before birth'; or postnatal or postpartum meaning 'after birth'. These periods are called perinatal. Perinatal mental illness affects up to 20% of new and expectant mums and covers a wide range of conditions.

Perinatal mental health effects more than just a mother, and it usually requires support from family and wider support networks. The Perinatal Mental Health Project (PMHP) has created a self-care tracker that can be used to help anyone going through a difficult mental health period (either before or after birth) to focus on taking steps to improve their mental health.

Anybody can be subject to domestic abuse regardless of gender, ethnicity, sexuality, age, or other socio-economic or personal characteristics. Abuse is most commonly within domestic relationships, but it can also be within close family groups such as parents to children. We often think of violence and threats when we think about domestic abuse, but there are many forms including financial abuse and emotional abuse such as gaslighting.

While domestic abuse can occur in all types of relationships, there are some specific issues which occur in an LGBT+ context such as threats to 'out' someone, undermining their gender or sexual identity and isolating them from their networks or support groups.

Domestic abuse is never the fault of the person who is experiencing it.

SafeLives is a UK wide charity dedicated to ending domestic abuse - their 'reach in' campaign can help you have supportive conversations with those suffering abuse.

Getting support from Accord

If you’re an Accord member and need a chat about support at work, all of our team of officers have been accredited in Mental Health First Aid by MHFA England. There are many ways to get in touch: 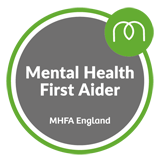 Was this article helpful?

0 out of 0 liked this article

How do I get support?